Shavuot
Moses at Sinai: God’s Partner or Adversary? Part 1
The first of a two-part study guide and lecture by Christine Hayes about Moses and the giving of the Torah at Sinai.
Christine Hayes
Edit 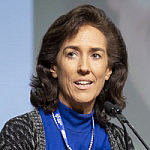 Christine Hayes
Dr. Christine Hayes is a Research Fellow of the Kogod Research Center at the Shalom Hartman Institute of North America. She is the Weis Professor of Religious Studies in Classical Judaica at Yale University, specializing in talmudic-midrashic studies. She received a BA in the Study of Religion, summa cum laude, from Harvard University and both an MA and PhD from the University of California Berkeley, Department of Near Eastern Studies. Her most recent book, What’s Divine about Divine Law? Early Perspectives, received the 2015 National Jewish Book Award in Scholarship, a 2016 PROSE award in Theology and Religious Studies from the American Publishers Association, and a 2016 Jordan Schnitzer Award from the Association of Jewish Studies. Her other scholarly monographs include Between the Babylonian and Palestinian Talmuds (1997 Salo Baron prize) and Gentile Impurities and Jewish Identities (2003 National Jewish Book Award finalist). She has authored two introductory volumes, The Emergence of Judaism and Introduction to the Bible. Edited works include Jewish Law and its Interactions with other Legal Systems (2014), The Cambridge Companion to Judaism and Law (2017) and Classic Essays in Rabbinic Culture and History (2018). She has held a faculty position at Princeton University, and visiting faculty positions at Tel Aviv University Law School and the University of Pennsylvania law school, and was a 2018 fellow at the Katz Center for Advanced Judaic Studies at the University of Pennsylvania. She is active in professional and academic organizations, serving for 4 years as co-editor of the Association for Jewish Studies Review. She is currently the President of the Association for Jewish Studies.

In this video lecture, Hartman research fellow Christine Hayes explores the following question: Who is the God of the Bible and Jewish tradition, and what does this God expect, want, and need of Moses and of Israel?

In Part 1, she analyzes an interaction in Exodus between God and Moses at the time of the revelation of the Torah, specifically in the immediate aftermath of the sin of the Golden Calf when God is at the brink of delivering the Tablets to Moses. Two distinct images of God and of Moses’s relationship with God emerge from this narrative.

In Part 2 (upcoming), she identifies the same two models of God and of divine-human interaction and traces them throughout rabbinic midrash.

Note that while Part 1 can be enjoyed independently of Part 2, it will be difficult to access the latter without the former. Feel free to watch the video on your own, or watch and study the texts with a partner.

In the first 22 minutes of the video below (from 22.20 onward will be Part 2) she provides a methodology of studying biblical and midrashic texts. See below for a source sheet and follow-up questions for discussion and reflection.